Stedelijk Statements: Joseph Sassoon Semah is the third edition of Stedelijk Statements, a program series in which a scholar, artist, critic, or cultural entrepreneur composes an evening at the museum. The organizer of the program is given the floor to share his or her views on visual art and design. New research and both artistic and academic projects will be presented during an evening program consisting of lectures, debates, performances, and film screenings. In this edition, artist Joseph Sassoon Semah discusses his statement on the lack of attention for Jewish narratives in contemporary art history.

On the evening of Friday, 20 October, following an interview by Margriet Schavemaker with Joseph Sassoon Semah and Emile Schrijver (Director of the Jewish Historical Museum), and two readings by Sander Pleij (Vrij Nederland) and Maarten Doorman (University of Maastricht), the first edition of the publication On Friendship / (Collateral Damage) II – The Guardians of the Door will be presented. The book was produced by Joseph Sassoon Semah and Linda Bouws and designed by Geert Schriever. The evening will conclude with the performance How to explain hare hunting to a dead German artist, a reflection on Joseph Beuys. 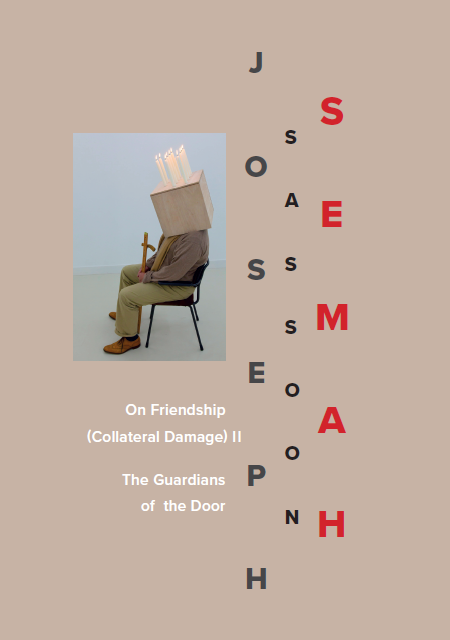 As long as the Western paradigm persists in the exhibition of an artwork as something that should be read, we must be aware of, and be familiar with, the history of Christianity. In this case—whether or not it is important to characterize the Western paradigm as an endless attempt to transform the original Christian movement into a contemporary philosophy—reading artworks in the public space continues to be a dubious masquerade from a far removed cultural past. It is evident, in any case, that there is no such thing as a profane work for those artists who are part of the Western paradigm. That is to say, all works of art displayed in the public space have always been ritualized and connected with a certain "”holy” text found somewhere; a random and therefore replaceable found text.

In this regard it should be noted that any artwork that is shown in the public space is both a necessity and an impossibility, a simultaneous presence of something readable and something dubious.

The answer is this:

The guest in our self is above all an artist with words, because words form the medium by which he has learned to make his name secret, hide his doubt, and repress his fear, by publicly criticizing his own desire to join the Western paradigm. To begin with, the nostalgia for a lost paradise pursues the guest, from the outset and throughout his entire active life in exile.

19:45    Reading | Sander Pleij is a journalist and editor for Vrij Nederland. In October 2015 he wrote the article “We must recognize the Jewish meaning in art,” which deals with Semah’s letter to Beatrix Ruf, director of the Stedelijk Museum, in which Semah calls attention to the absent Jewish references in contemporary art. Pleij became fascinated with the interaction between aesthetics and intellectuality (image and language) in Semah’s work.

20:00    Interview with Joseph Sassoon Semah | Emile Schrijver is the director of the Jewish Historical Museum in Amsterdam. Previous to his appointment at the Jewish Historical Museum, he was curator of the Bibliotheca Rosenthaliana as part of the Special Collections, as well as a special professor of the History of the Jewish Book at the University of Amsterdam. He wrote “Reflections about a nascent friendship” as a contribution to the publication.

20:40    Reading | Maarten Doorman is a writer and philosopher. He teaches philosophy at the University of Maastricht and is a special professor of the Historical Culture of Germany, on behalf of the German Institute of Amsterdam (DIA), at the Vrije Universiteit. He wrote the essay “Luther as an raw nerve in German history” on the subject of the burning of Jewish writings.

21:00    Performance | How to explain hare hunting to a dead German artist, a reflection on Joseph Beuys

The Friday night is part of a larger program of five performances at the Stedelijk Museum on 20, 21, and 22 October about the question of the present moment, namely, whether the museum should no longer simply be a place of presentation. The performances by Joseph Sassoon Semah demonstrate that the museum is also a place where various interpretations and visions of art are substantiated.

Artist Joseph Sassoon Semah (1948) was born in Baghdad, where his grandfather, Hacham Sassoon Kadoori (1885–1971) was the president of the Babylonian Jews. Together with his parents, he was “resettled” to the state of Israel in 1950. In the mid-seventies Semah decided to leave Israel. He speaks in this regard as an exile by choice. He has lived and worked in London, Berlin, and Paris, and since 1981 has been located in Amsterdam. He has positioned himself as the “Guest.” By reading in his native language, Hebrew, Semah signals a lack of Jewish knowledge in art history.

In On Friendship / (Collateral Damage) II – The Guardians of the Door (22 June 2017–January 2018) 500 years of reformation and Luther are key: art, performances, artistic interventions, round table discussions, lectures, and a publication are critically reflected in the image of Martin Luther as a “superstar,” as well as his meaning then and now. The Nieuwe Kerk (22 June–27 August), the Jewish Historical Museum (4 October—14 January), the Stedelijk Museum (20, 21, and 22 October), and the Goethe Institute (9 November until end 2017) are partners in the project.

With thanks to the Nieuwe Kerk, the Jewish Historical Museum, the Stedelijk Museum, the Goethe Institute, Fonds Kerk en Wereld, Gravin van Bylandt Stichting, Haëlla Stichting, Kattendijke/Drucker Stichting, Mondriaan Stichting, De Vrijzinnige Fondsen, Rijwielhandel Oud-West, and all of the contributors to On Friendship / (Collateral Damage) II – The Guardians of the Door.