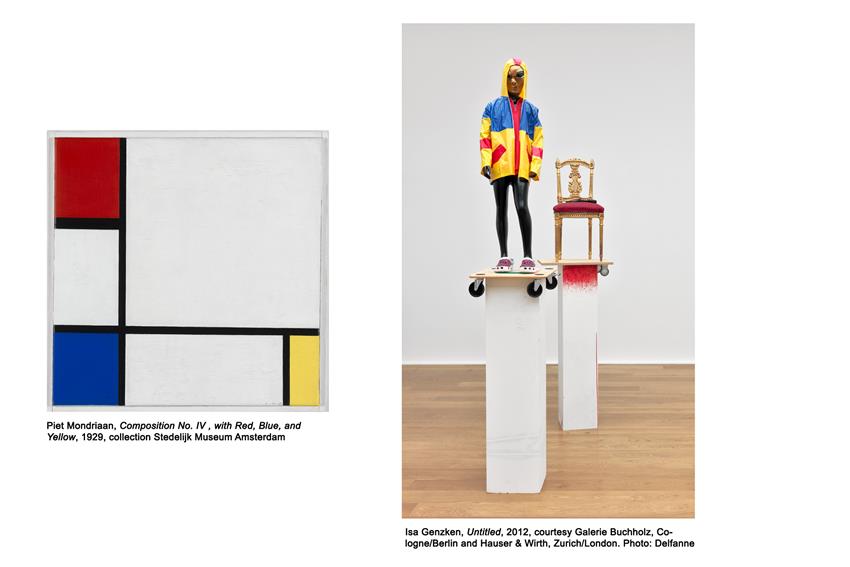 Amsterdam, 21 November 2016 - 2017 marks a hundred years since the founding of De Stijl, a legendary group of artists and architects that revolved around Theo van Doesburg, Piet Mondrian and Gerrit Rietveld. Museums throughout the Netherlands will be celebrating this special year. In a series of three presentations throughout 2017, the Stedelijk will focus on unexpected sides of De Stijl, such as an exhibit highlighting the work of De Stijl defector Chris Beekman. The Stedelijk also pays attention to connections with the Russian Revolution, which also occurred in 1917.

The inaugural issue of the magazine De Stijl was published in October 1917. The journal provided the artists, designers and architects with a platform for their pioneering ideas: by radically redefining art they hoped to create a world of total harmony, and to unify art and life. De Stijl’s theories of colour and space led to a revolutionary language of pure abstraction intended to express that harmony.

The Stedelijk Museum acquired a large collection of work by De Stijl and, by staging several key exhibitions, including a major survey in 1951 curated by former director Willem Sandberg that travelled to MoMA in New York, was the impetus behind the international recognition of the movement.

Although disbanded in 1931, De Stijl is no less influential today, embraced by artists, designers and architects as an inspiration, or rejected as an inexorable certainty.

The exhibitions marking 100 Years of De Stijl are part of the Stedelijk’s new, longer-term research project. This initiative centres on approaching, interpreting and presenting the museum collection in an experimental way, with no distinction between art and design. The project also examines the rich history of the institute, and the archives.

De Stijl and the Stedeljik
3 December 2016 – 21 May 2017
In an exhibition that occupies six galleries, the Stedelijk presents the breadth of its collection of De Stijl, and explores relationships between the movement and the work of other artists in the museum’s holdings. For example, what does the work of Isa Genzken have in common with De Stijl? And what connects Bas Jan Ader, or the iconic Lichtenstein in the Stedelijk collection, to De Stijl? The presentation examines different facets such as use of colour, the diagonal, purity, architecture and the dissemination of the movement. Works of De Stijl that powerfully convey this ideology are juxtaposed with work by post-war artists. De Stijl was clearly an inexorable certainty for successive generations. Some artists offer an inspired ode; others explore what De Stijl means today. In the 1990s, for instance, General Idea parodied the dominance of De Stijl in their work Infe©ted Mondrian.

Chris Beekman, De Stijl Defector
8 April – 17 September 2017
The Stedelijk focuses attention on the work of Chris Beekman, one of the most politically active artists affiliated with this movement. The oeuvre of this forgotten De Stijl artist is presented for the first time, featuring around 80 artworks from the holdings of the Stedelijk Museum, Museum Kröller Müller and the Amsterdam Museum.
Painter and communist Chris Beekman (1887-1964) was friends with left-wing radicals like Bart van der Leck, Peter Alma and Robert van ’t Hoff. The works he produced during the early years of De Stijl show a liberal use of geometric shape and colour. However, Beekman later rejected the group’s purely idealistic ethos and what he saw as the movement’s lack of concrete social engagement. The world was in turmoil, and needed an art that everyone could understand. In the early 1920s, he abandoned abstraction in favour of figurative work of a more political nature. The exhibition clearly traces Beekman’s break with De Stijl: as Mondrian paints his most ethereal black and white work, a disillusioned Beekman sets out to create an art for the common people. With this, he forms a trait-d'union between De Stijl and the Russian Revolution: many Russian artists, including Malevich, also returned to figuration.
In addition to highlighting Beekman’s work from immediately before, during and after the De Stijl period, the presentation also explores the immediate context within which he worked. Brought into focus are links with Bart van der Leck and Piet Mondrian, with whom he became acquainted in Laren, as well as work by Jacob Bendien, Johan van Hell and Ferdinand Erfmann, and unusual early abstract work by Carel Willink
An epilogue will be added to the exhibition at the end of May 2017, revealing that Beekman sent issues of De Stijl, with photos of abstract work and De Stijl architecture, to Malevich. Research suggests that a staircase design by Van ’t Hoff is likely to have influenced the development of the last phase of Malevich’ Suprematism: the Architektons.
On 2 and 3 June 2017, the Stedelijk Museum and the Khardzhiev Stichting will jointly host an international symposium: The Many Lives of the Russian Avant-garde – Symposium in honour of Nikolai Khardzhiev, scholar and collector (1903-1996). Participants include leading scholars who will discuss the Russian avant-garde as a multi-disciplinary enterprise encompassing art, literature, politics and philosophy.

De Stijl and Metz & Co (working title)
14 October 2017 – 28 January 2018
Members of De Stijl created furniture, interior textiles, packaging and other design items for the Amsterdam department store Metz & Co. From the late 1920s, the department store was highly influential in disseminating Modernism in the Netherlands. The presentation includes a selection of striking objects from the Stedelijk collection by artists including Bart van der Leck, Friedrich Vordemberge-Gildewart and Vilmos Huszár, in conjunction with the designs they created for Metz & Co. The exhibition pays particular attention to the Zig-Zag furniture designs of Gerrit Rietveld, several of which Metz & Co put into production in 1934. Also featured is work by artists who adopted the aesthetic of De Stijl such as Sonia Delaunay, who created a large number of fabric designs for the department store.

In 2017, the centennial year of the Russian Revolution, the Stedelijk will also explore the revolution in an exhibit featuring films and film posters of the era, and a presentation in which artists of the eighties and nineties reflect on Soviet society.

The exhibitions marking 100 Years of De Stijl are part of the Stedelijk’s new, long-term research programme. The project centres on approaching, interpreting and presenting the museum collection in an experimental way, making no distinction between art and design. It also examines the rich history of the institute, and the archives.