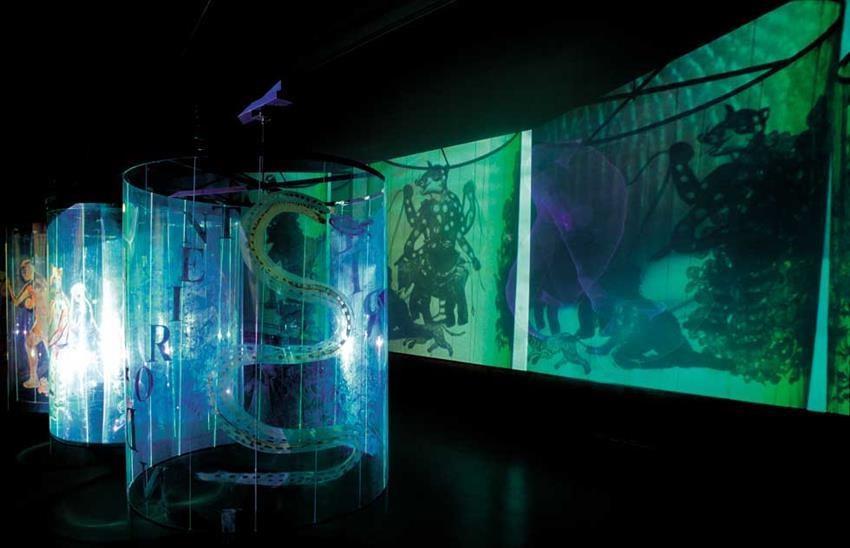 Amsterdam, 24 January 2017 - This spring, the Stedelijk Museum presents work by the Indian artist Nalini Malani (1946, Karachi). For fifty years, Malani’s politically-charged oeuvre, which blends political, social and ecological issues with narratives referencing classical literature and myth, has captivated a broad spectrum of audiences. As a refugee after the Partition of India, Malani and her family experienced trauma and oppression at first hand. Malani’s work challenges discrimination, and advocates a progressive role for women in society.

The presentation is part of the Stedelijk’s new, long-term research programme of exhibitions on the ground floor that take a fresh look at the collection, and place it within the context of current social issues. As part of this exhibition programme, the Stedelijk will mount six exhibits on the theme of migration in 2017, the first of which highlights the work of Nalini Malani.

Beatrix Ruf, director of the Stedelijk Museum: "Nalini Malani is one of India’s most highly respected artists; you could compare her with Marlene Dumas. She creates dazzling multimedia installations that include video, painting, poetry and moving shadow play. The Stedelijk first acquired her work for the collection in 2002. Her oeuvre focuses on incredibly relevant issues, and it’s time to bring her back into the spotlight. Worldwide, there is renewed interest in her work. She held an exhibition in Boston in 2016, and the survey at the Stedelijk is a prelude to a major retrospective opening later this year at Centre Pompidou, after which it will travel to Turin.”

Transgressions: the heart of the exhibition
The installation Transgressions (2001) from the Stedelijk collection, is the heart of the exhibition, and the first of what Malani terms ‘video/shadow play’. The combination of four slowly rotating Mylar plastic cylinders – painted using the reverse painting technique – through which video images are projected, creates an endlessly varying shadow play upon the gallery walls.

Transgressions is rich in narratives that invite interpretation. The video projections begin as the shadows of the paintings drift across the skin of a Caucasian man, like tattoos brought to life, before merging with colour-processed segments of Bollywood films. A cascade of words rains down on the cinematic images, a selection of texts from the apparently inexhaustible wealth of Indian languages which, under the impact of globalisation, are on the brink of extinction because they are no longer being taught. 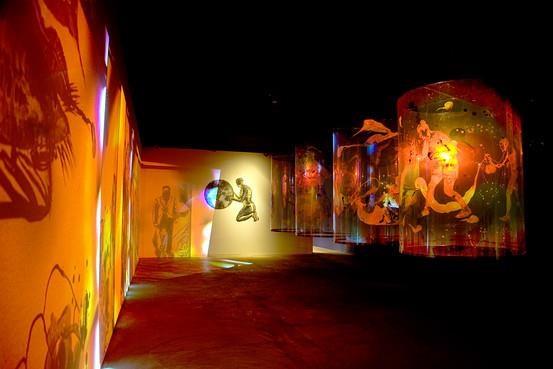 The paintings on the cylinders recall the traditional Indian Kalighat style, and depict a British big game hunter astride an elephant, the goddess Durga, two boxers, and the map of the sub-continent with Pakistan and India forever locked in combat.

In an audio track alluding to the impact of globalisation, a female voice recites ‘I speak orange, I speak blue’, in a reference to the mobile phone providers dominating India. At the time the work was created, ‘Orange’ was the leading mobile telephony company, advertising talk time for a rate equivalent to that of a snack you buy cheaply on India’s streets. The soundtrack also features a little girl imploring her mother to send her to ‘English school’, with which Malani underlines the prevailing attitude in India that only those fluent in the English language will secure a place in the society of the future.

Extra works and mural
Nalini Malani and Margriet Schavemaker of the Stedelijk, curator of the exhibition, have selected around 25 additional works that contextualise the themes and numerous references to literary and classical sources in Transgressions. These pieces also trace the development of Malani’s remarkable multi-media practice, from the experimental films of the 1960s and 1970s, the video documentaries of her unconventional theatre pieces of the 1990s, to the artist’s books produced between 1991 and 2016.

In the week prior to the opening, Nalini Malani will create a wall drawing at the entrance of the exhibition. The mural is a highly topical medium at present, particularly among a new generation of both Indian and Western artists, and has been central to Malani’s oeuvre since 1991. The wall drawings were the first step in the development of her later shadow installations. On Sunday, 18 June, the exhibition concludes with an event that is customary in Malani’s practice: the wall drawing will be completely erased in an Erasure Performance (the surprise performers will be announced in due course).

Publication and symposium 17 March 2017
An important departure point for this exhibition is the comprehensive publication In Media Res. Inside Nalini Malani’s Shadow Plays (Hatje Cantz, 2016) by Mieke Bal, Emeritus Professor of Literary Studies. One of the chapters of this publication is devoted to Transgressions.

On the afternoon of Friday 17 March, before the exhibition opens, the University of Amsterdam officially bids farewell to Mieke Bal with a symposium in the Stedelijk auditorium. Click here for details about the speakers and programme.